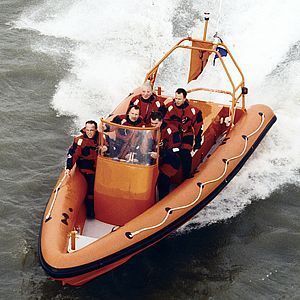 The HP-700 has been developed as a proof of concept.  She is a fast inshore rescue/intercept boat, which can be used for inshore activities or customs and similar operations.  She has a crew of 3 but can carry a total of 6 passengers.  She was designed by Marine Aluminium Technic AB, Sweden, and has been developed and built in cooperation with Volvo Kamewa of Sweden.

(RIB can be used in waves up to 4 meters high and up to 8 Beaufort max.)