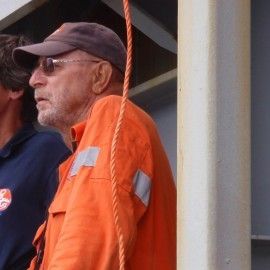 In January 2012 I went to the Netherlands for the refit process of our Valentine class boat, achieved as the “NOMAD”. It was built for the transport of persons and not directly as a rescue boat. It was my first introduction with Habbeke Shipyard in Volendam and also with Closed Valentine model, unlike the “normal” Valentine which have an open wheelhouse.
After the refit, I have sailed several times to learn about the possibilities of a ship powered by water jets. I had some experience in Curacao with Antje, the old lifeboat from Katwijk, but this was a breath of fresh air compared to the Antje where you barely had a reverse and who flew off the water when turning at full speed PS or SB, the Nomad just keeps sticking to the water without breaking out. After the necessary adjustments, towing bollards, more Ullman seats, NOMAD was shipped to the island where she arrived on the Lady Claudia on April 12.
From the arrival of the ship is the “Dick Braakman”, renamed in honor of the former operations coordinator of the CITRO. In Curacao we have the same kind of waves that is comparable to wind force 8 on the IJssellake, so very nasty short waves no problem for the boat but the crew should abandon properly. In 2 years I have sailed almost all actions as skipper, and must say the boat will never let you down, you can do everything with it what you want. Here our mainly jobs is the salvage of fishing boats and yachts, Venezuelan floating market, guiding sailing regattas, getting people out of the water, (with the stern platform for rescueworkit is easy to get a person out of the water) ., medical evacuation merchant ships, etc., the waves are never higher than 3 m here only in a short time, so annoying. Due the speed of our vessel, our actions never last much longer than three hours. Towing boats on the towing bollards goes smoothly with the amount of horsepower of the vessel.